Results include Indicated Mineral Resources of 59.3 Million Tonnes (“Mt”) grading 10.61% graphitic carbon (“Cg”), equivalent to 6.3 Mt of in-situ graphite, and suggest the deposit has the potential to become one of the largest sources of high-quality flake graphite in North America.

Kingston, Ontario, February 17, 2022 – Focus Graphite Inc. (TSX.V:FMS, OTCQX:FCSMF) (FRANKFURT:FKC) (“Focus” or the “Company”) is pleased to report its maiden mineral resource estimate for its 100%-owned Lac Tétépisca graphite project (the “Project”) located southwest of the Manicouagan Reservoir in the Côte-Nord administrative region of Québec on the Nitassinan of the Pessamit Innu.

1A cut-off grade of 3.9% Cg was applied to all estimates.

Focus will file a technical report pursuant to National Instrument (N) 43-101 to support disclosure of the MRE on SEDAR (www.sedar.com) within 45 days of the issuance of this press release.

“The results of this maiden mineral resource estimate for the MOGC prospect have exceeded our expectations. They show the great potential of our Lac Tétépisca project, which we can now claim hosts one of the largest undeveloped flake graphite deposits in Québec,” said Marc Roy, President and CEO of Focus Graphite. “Along with our flagship Lac Knife graphite project, we now have two significant graphite deposits in Québec, which puts Focus in a strong position to occupy a vital link in the North American primary graphite supply chain. We aim to become a secure and reliable supplier of critical and strategic minerals to reduce North American dependence on foreign sources.”

Mr. Roy continued, “While our focus remains on bringing our flagship Lac Knife graphite project to commercial production, we will also begin investigating the best way to advance the development of our Lac Tétépisca graphite project. We plan to consult the communities that could potentially be impacted by the next stages in the development of the project to listen to their concerns and expectations and to offer them an opportunity to participate in project steering committees. We will also consult the Québec Government about potential incentives and initiatives that could help facilitate the development of the project and achieve social acceptability, particularly incentives provided under its Plan for the Development of Critical and Strategic Minerals 2020-2025. At the same time, we intend to continue exploring the remainder of the project or other significant flake graphite occurrences.” 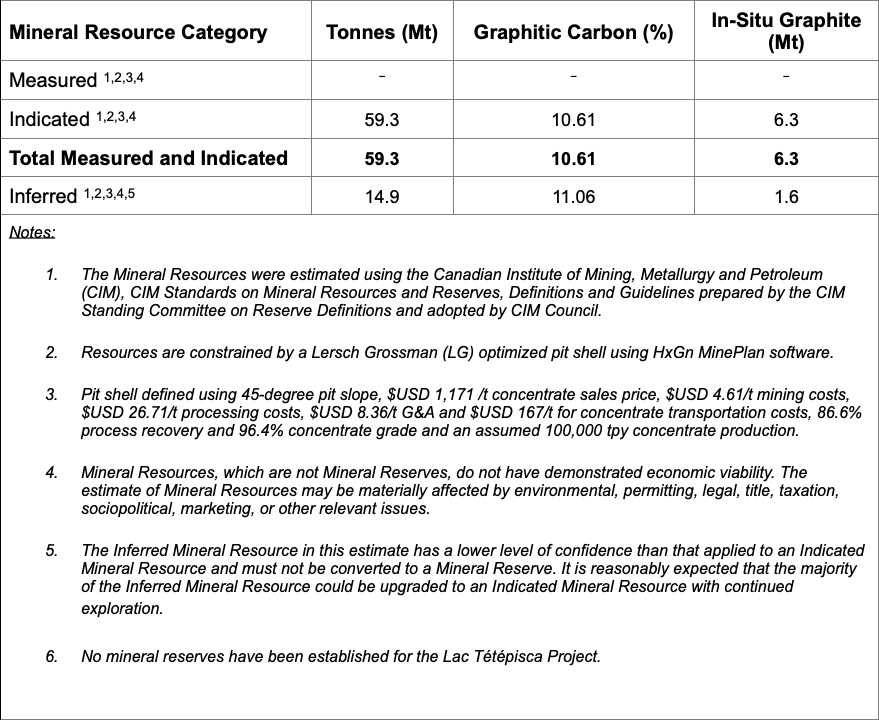 Plan and longitudinal views of the conceptual 2D pit shell with mineral resource blocks for the MOGC graphite deposit are available on the Company’s website at focusgraphite.com.

The maiden mineral resource estimate (“MRE”) for the Lac Tétépisca project is based on 106 inclined diamond drill holes performed between 2014 and 2020 on the Manicouagan-Ouest Graphitic Corridor (“MOGC”) graphite prospect, for a total of 16,467 metres. Focus discovered the MOGC prospect in July 2012 while conducting reconnaissance geological mapping, prospecting, and outcrop sampling on the Property. The MOGC is defined by a linear kilometre-long ground geophysical Magnetic (MAG) – Electromagnetic (EM) anomaly that trends N035o. Drilling was conducted in a 1.4 km long segment of the MOGC, along fences up to 300-metres long, with fences oriented N305o and spaced 100 metres, 50 metres or 25 metres apart.

The mineral resource estimate was prepared by Schadrac Ibrango, P.Geo (QC), PhD, MBA, Lead Geologist and Qualified Person (“QP”) for DRA. The geology was interpreted in 2D vertical sections followed by the construction of 3D envelopes of the mineralized zones. Three (3) mineralized zones were modelled; a principal one and two small grade zones. Compositing was made at a 2-metre length which represent the second statistical mode of the assays sampling length histogram. Block size of 10 m x 10 m x 5 m was selected based on the average drill spacing over the estimation domain. Geological modelling and mineral resource estimate were performed using HxGN MinePlan 3D (previously MineSight) with Cg% and Sulphur content (%) grades estimated using Inverse Distance Squared (“ID2”). No capping was applied on Cg% since its statistical distribution doesn’t show extreme high values population associated with a nugget effect. A mathematical regression model developed between density and Sulphur content was used to allocate a density for each block interpolated based on its Sulphur content.

The effective date of the MRE is September 17, 2021 which is the date of reception of the final version of the drill hole database.

DRA consultant Schadrac Ibrango, P.Geo. (QC), PhD, MBA, is responsible for estimating the mineral resources and has reviewed and approved the contents of this press release. Mr. Ibrango is a Qualified Person (“QP”), independent of Focus Graphite, within the meaning of NI 43-101 – Standards of Disclosure for Mineral Projects of the Canadian Securities Administrators.

Mr. Marc-André Bernier, géo. (QC), P.Geo. (ON), M.Sc., Senior Geoscientist for Table Jamésienne de Concertation Minière, a consultant to the Company and a Qualified Person as defined under National Instrument (NI) 43 – 101 Standards of Disclosure for Mineral Projects has reviewed and approved the non-technical content this news release.

About the Lac Tétépisca Graphite Project

Focus Graphite’s 100%-owned Lac Tétépisca Graphite Project comprises two contiguous properties, Lac Tétépisca and Lac Tétépisca Nord, located in the Southwest Manicouagan reservoir area of the Côte-Nord region of Québec, 234 km north-northwest of the city of Baie-Comeau, an industrial city located where the Manicouagan River intersects the north shore of the St. Lawrence River. Together, the two properties form a block of 115 map-designated claims (total area: 6,198.27 ha). Focus purchased a 100% unencumbered interest of the mineral rights in the 67 CDC claims constituting the original Lac Tétépisca property from a third party in August 2011. The Lac Tétépisca Nord property was map-staked by the Company in 2012. The Lac Tétépisca Project is accessible year-round by way of a network of secondary gravel roads that extend north from Highway 389, 10 km to the south of the Manic 5 hydroelectric power station.

DRA Global Limited (ASX: DRA | JSE: DRA) (DRA) is a multi-disciplinary consulting, engineering, project delivery and operations management group predominantly focused on the mining and minerals resources sector. DRA has an extensive global track record, spanning more than three decades and more than 7,500 studies and projects as well as operations, maintenance, and optimisation solutions across a wide range of commodities.

DRA has expertise in mining, minerals and metals processing and related non-process infrastructure including sustainability, water and energy solutions for the mining industry. DRA delivers advisory, engineering and project delivery services throughout the capital project lifecycle from concept through to operational readiness and commissioning as well as ongoing operations, maintenance, and shutdown services.

DRA, headquartered in Perth, Australia, services its global customer base through 20 offices across Asia-Pacific, North and South America, Europe, Middle East, and Africa.

For more information about Focus Graphite and the Company’s Lac Tétépisca and Lac Knife projects, please visit Focus’s website at  focusgraphite.com or contact:

Neither the TSX-V nor its Regulation Services Provider (as that term is defined in the policies of the TSX-V) accepts responsibility for the adequacy or accuracy of this news release.

This press release contains “forward-looking information” within the meaning of Canadian securities legislation. All information contained herein that is not clearly historical in nature may constitute forward-looking information, including references to the plans and project of the Company such as proceeding with production at the Company’s Project, proceeding with exploration activities on its permits on Lac Tétépisca. Generally, such forward-looking information can be identified by the use of forward-looking terminology such as “potential”, “high-potential”, “expected”, “optimistic”, “looking forward”, “moving forward”, or variations of such words and phrases or state that certain actions, events or results “may”, “could”, “would” or “might”. Forward-looking information is subject to known and unknown risks, uncertainties and other factors that may cause the actual results, level of activity, performance or achievements of the Company to be materially different from those expressed or implied by such forward-looking information, including but not limited to: (i) volatile stock price; (ii) the general global markets and economic conditions; (iii) the possibility of write-downs and impairments; (iv) the risk associated with exploration, development and operations of mineral deposits; (v) the risk associated with establishing title to mineral properties and assets; (vi) fluctuations in commodity prices; (vii) the risks associated with uninsurable risks arising during the course of exploration, development and production; (viii) competition faced by the issuer in securing purchasers, off-taker markets, clients and experienced personnel and financing; (ix) access to adequate infrastructure to support mining, processing, development and exploration activities; (x) the risks associated with changes in the mining regulatory regime governing the issuer; (xi) the risks associated with the various environmental regulations the issuer is subject to; (xii) risks related to regulatory and permitting delays; (xiii) risks related to potential conflicts of interest; (xiv) the reliance on key personnel; (xv) liquidity risks; (xvi) the risk of litigation; and (xvii) risk management.