A feasibility study prepared by Met-Chem Canada Inc. (now DRA Americas Inc.) in 2014 indicated positive project economics that position the project to become one of the lowest-cost, highest-margin producers of graphite in the world.

In 2021, Focus commissioned DRA Americas Inc. to update and modify the 2014 feasibility study for the Lac Knife Project and prepare a new NI 43-101 Technical Report in accordance with the Canadian Securities Administrators’ Standards of Disclosure for Mineral Projects. These updated reports are anticipated to be completed in 2022.

In parallel, Focus is now expediting the completion of the Lac Knife environmental and social impact assessment (ESIA) study, also scheduled to be completed in 2022.

Click here to find out more about our current plans for Lac Knife, including our partnerships with the local indigenous and other communities. (in French only)

Details of study updates can be found in our recent general project update announcement.

Lac Knife is situated in the Grenville Geological Province of northeastern Québec, about 27 kilometres south of Fermont, a full-service town which serves as a base for ArcelorMittal’s Mont-Wright iron ore operations. The property consists of a total of 57 mining claims covering 29,863 hectares.

The area is a historic and active mining region, hosting excellent infrastructure including electric grid power and nearby access to road, rail, and port facilities. Other nearby towns include Wabush and Labrador City, both of which serve other iron ore mines in the area.

The Lac Knife graphite property was discovered in 1959 by D.L. Murphy during geological survey work by the Québec Ministry of Energy and Resources. Between 1986 and 1990, Mazarin Inc. conducted exploration work that expanded the Murphy showing, and completed pre-feasibility and feasibility studies between 1989 and 1990. 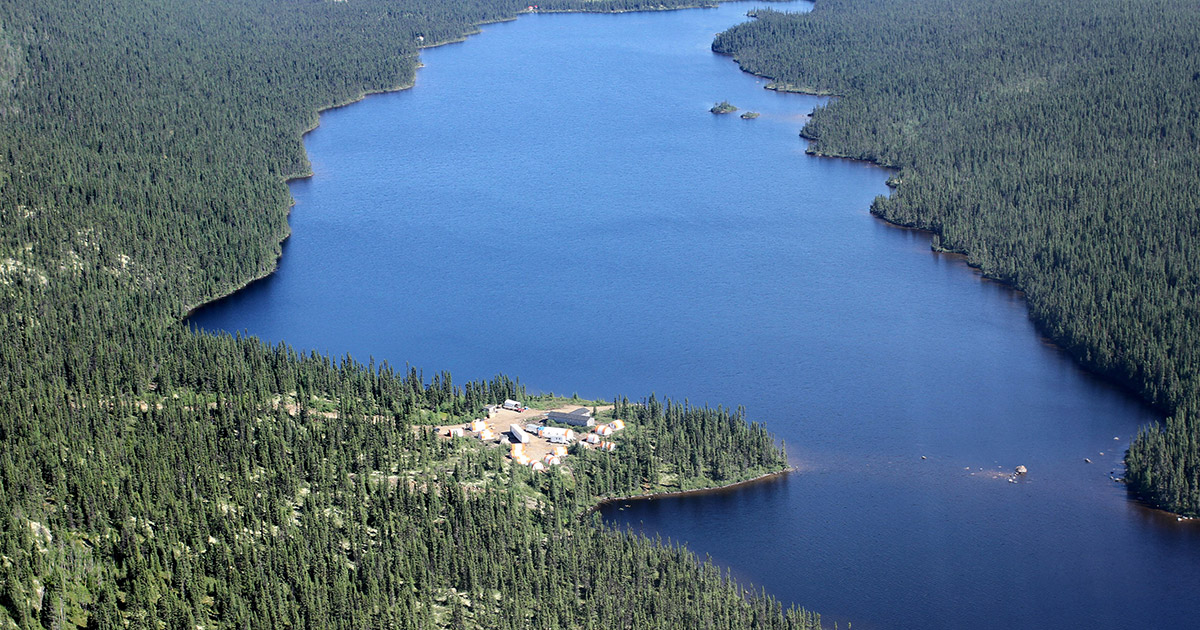 In August 1990, Cambior signed a joint venture for an equal partnership with Mazarin for the Lac Knife Project. In 2001, interest in Lac Knife increased as the graphite market was emerging for hydrogen fuel cells and other uses. Graftech Inc. conducted a study that demonstrated the exceptional quality of the graphite at Lac Knife.

In 2002, Graftech and Mazarin planned a joint venture with the goal of starting production in 2004. However, the graphite market declined and the project was halted. IAMGOLD subsequently purchased Cambior, which included the Lac Knife asset.

The current surge in lithium-ion battery demand has created considerable interest in securing new domestic primary supply chains for critical materials such as graphite, which is used in the manufacture of anodes for lithium-ion batteries and in a variety of other high-tech industries. Focus is now aggressively advancing the update of the Lac Knife feasibility study and NI 43-101 Technical Report to address current market drivers and to move the project towards production to meet this demand.

Graphite mineralization is set in migmatized biotite-bearing quartz-feldspar gneiss belonging to the Nault Formation of the lower Proterozoic Gagnon Group. According to the Québec Ministry of Natural Resources, where this gneissic unit is sheared, brecciated and silicified, coarse graphite flakes and associated sulphide minerals make up 5% to 10% of the rock, with up to 20% or more in the more brecciated zones. Fuchsite and other iron-rich micas accompany the graphite and sulphide mineralization in the more silicified horizons. 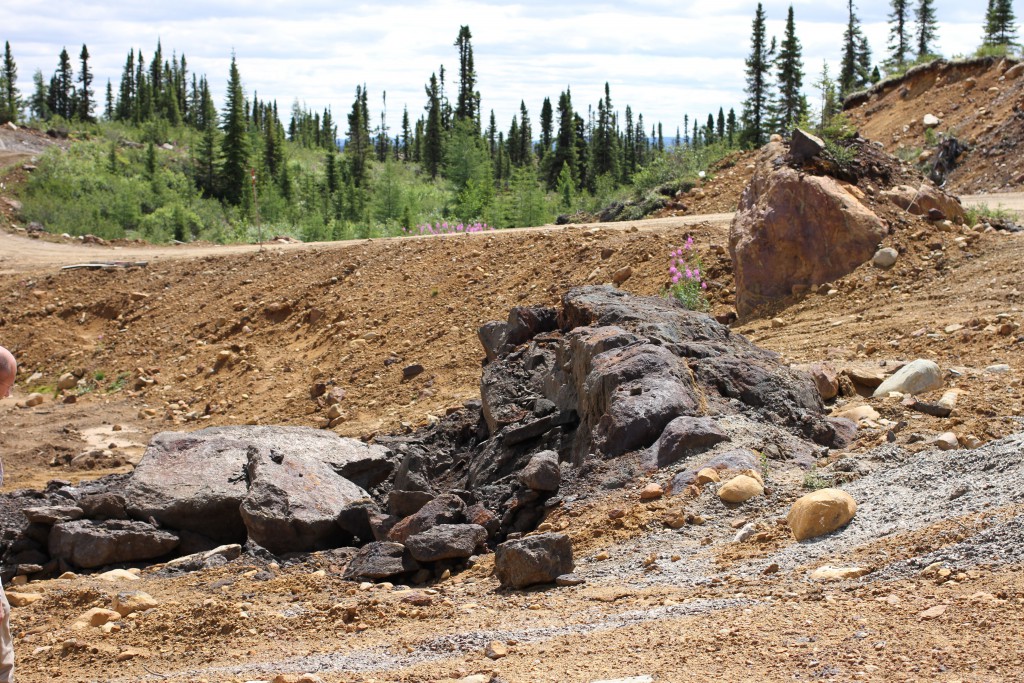 The open pit design includes 429 kt of proven reserves and 7,428 kt of probable reserves for a total of 7,857 kt of proven and probable mineral reserves grading 15.13% Cg.  The mineral reserves which account for mining dilution and ore loss are reported at a cut-off grade of 3.1% Cg.  In order to access these reserves, 2,746 kt of overburden, 10,926 kt of waste rock and 231 kt of Inferred mineral resources must be mined.  This total waste quantity of 13,903 kt results in a stripping ratio of 1.8 to 1.

The following table presents the Lac Knife open pit mineral reserves that were estimated for the historical 2014 feasibility study.  The remaining measured and indicated resources within the Lac Knife deposit will help to develop the mid and long-term growth profile for the company.

Note: Mineral resources are not mineral reserves and do not have demonstrated economic viability.  See ‘Lac Knife Open Pit Mineral Reserves’ table above for reserves.

A pit optimization analysis was carried out using the MS-Economic Planner module of MineSight® which ran the Lerchs-Grossmann algorithm to determine the economic limits of the deposit.  The analysis showed that the open pit design for the feasibility study should be based on a 25-year mine life that includes approximately 82% of the measured and indicated mineral resources.

The open pit design incorporates 10 m high benches and follows the pit slope recommendations from the 2014 geotechnical investigation.  The pit is 700 m long and 400 m wide at surface and has a maximum pit depth of 100 m.

A positive feasibility study, prepared by Met-Chem Canada Inc.  (now DRA Americas Inc.), released on August 8, 2014, indicates that Lac Knife has the potential to become one of the lowest-cost, highest-margin producers of graphite in the world at $441 per tonne of graphite concentrate.

Mining was assumed to be carried out by a mining contractor who will use conventional open pit mining methods that include drilling and blasting followed by a hydraulic excavator loading a fleet of 46-tonne haul trucks.  The mine will be operated seasonally (7 months of the year) and a front-end wheel loader will be used to feed the processing plant from an ore stockpile during the winter months.

The study was conducted with engineering and estimation methods appropriate to target an estimate accuracy of 15% that is standard and realistic for capital and operating cost estimates in a feasibility study.  Based on an extensive risk review exercise the contingency is 11.5%.  The estimated capital expenditures in the table below outline the cost to construct the mine, processing plant, power line and all associated infrastructure, resulting in an estimate of $165.55 million.

The operating costs per tonne of concentrate produced are $441 (see Operational Expenditures table below).  This is an improvement over the updated Preliminary Economic Assessment (PEA) that showed $458 per tonne of concentrate produced.  One key variable to low production costs is Lac Knife’s project location giving relatively easy access to hydroelectric power from Hydro-Québec at the intersection of the access road and Provincial Highway 389.

The annual milling capacity is 323,670 tonnes per year to produce 44,300 tonnes of concentrate annually at a cost of $441 per tonne of concentrate.  The concentrate will grade 97.8% Graphitic Carbon (Cg) on average for a 25-year open pit mine life based on current open pit reserves.  All graphite concentrate produced with flakes larger than 200 mesh contain more than 98% Cg.

Results from the feasibility study indicate that the Lac Knife Project is viable economically with a base case scenario that includes a concentrator production line rate of 44,300 tonnes of concentrate annually at an average mill feed rate of 323,670 tonnes per year of mineral reserves over a 25-year mine life.  A concentrator availability of 93% was used for the study.  The additional measured, indicated, and inferred resources will continue to be evaluated to develop the mid and long-term growth profile.

Average prices used in the financial model do not include value added products that can be produced using the typically lower valued finer natural flake graphite.  These finer graphite concentrates can be further processed into value added products for the lithium-ion battery market due to their high carbon content.

Since the 2014 feasibility study, Focus has completed or undertaken several studies, the findings of which will serve as a basis for optimizing the potential of the Lac Knife project considering the evolution of the graphite market, notably with respect to the demand for raw materials related to lithium-ion batteries and electrification of transportation.

In early 2021, engineering firm DRA Americas Inc. was engaged to update the 2014 feasibility study for the Lac Knife project and prepare a new technical report in accordance with the Canadian Securities Administrators’ National Instrument (NI) 43-101 – Standards of Disclosure for Mineral Projects.

The key changes to the feasibility study under consideration are:

The updated feasibility study is expected to be completed in 2022.

Focus filed an Environmental and Social Impact Assessment (ESIA) with Québec’s Ministry of the Environment and Climate Change (“MELCC”) in December, 2014.  In 2017, Focus received a series of questions from the MELCC.  The process to answer these questions requires a fundamental change to the design of the tailings management system concept for the Lac Knife project along with additional field surveys designed to comply with new environmental guidelines and regulations introduced by the MELCC in 2016.

To address these questions, the following surveys and investigations have been completed or are near completion:

Québec’s MELCC has since requested an updated ESIA from Focus to complete their analysis of the Lac Knife project and determine if the project is ready to move to public information and consultation, the next phase of the environmental permitting process.  Focus has retained IOS Services Géoscientifiques to perform the ESIA update, which is ongoing.

Following a hiatus due to COVID-19, Focus resumed work on the ESIA study during the summer of 2020, as COVID-19 containment measures were being eased.  Focus has also instructed IOS Services Géoscientifiques to undertake, update, complete or commission the following surveys and investigations over the coming months:

Assuming the timely execution of the studies and reports delivery, the Company expects to submit the definitive and complete set of answers on the Lac Knife project to the MELCC before the end of 2021.